Family, friends and colleagues pay a touching tribute to one of Britain's finest comedy actresses, Mollie Sugden, who died in 2009. 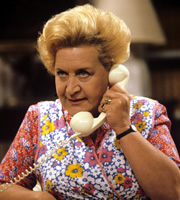 Mollie Sugden was one of the nation's best loved stars, whose extensive career is showcased in this 30 minute long documentary. The show features archive footage of the comedy favourite in a host of her best loved TV shows, as well as other highlights from her career. As well as featuring many clips there is special guest interviews from co-stars, family members and friends.

Mollie Sugden was best known for portraying the saleswoman Mrs Slocombe that brought her international fame in the popular, long-running British sitcom sensation Are You Being Served?. She also appeared in many other television series, including The Liver Birds and played the returning character Nellie Harvey for over eleven years in Coronation Street.