Griff takes centre stage in this all-star sketch show, where he will be joined by some of the biggest names in television.
Preview clip 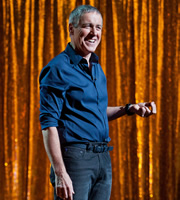 Griff takes centre stage in this all-star sketch show, where he will be joined by some of the biggest names in television, including Hugh Bonneville (Twenty Twelve), Tom Hollander (Rev) and Larry Lamb (Gavin & Stacey). And Mel Smith will be doubling up with Griff, as they reprise their iconic Smith And Jones head to head sketch.

Despite numerous mentions both in publicity and during the episode itself, The One Griff was not the first time in 16 years that Jones had starred in a comedy programme, nor appeared with Mel Smith: the 2008 retrospective series The Smith & Jones Sketchbook had been presented by both men, and included a number of newly recorded 'head to head' sketches.

Griff Rhys Jones and Hugh Bonneville perform a banking-based sketch where it seems Griff's character is less than pleased with his bonus...