Matt's guests are Alan Davies, Jo Brand and Rhod Gilbert - and the categories they'll be discussing during the show include 'Most Irritating Christmas Song' and 'Lamest Christmas Present Ever Received'.
Preview clips 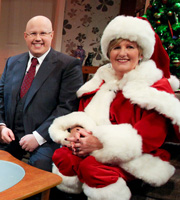 Jo Brand: Not being 'me' diet

Most Disappointing Christmas Present Ever Received

Rhod Gilbert: I'm so good at French I can convince a French person I'm French

Alan Davies tells Matt why he cut down on carbs.