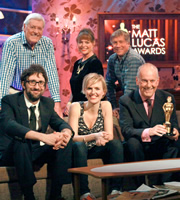 This week's awards are the Lucas for Least Helpful Expression, the Lucas for Most Ridiculous British Law and the regular Hidden Talent Award.

Who will be leaving Matt's front room with their own golden Lucas statue? Only The Matt Lucas Awards has the answers.

Mark Watson: "The darkest hour is just before the dawn"

Gyles Brandreth: "Many a mickle makes a muckle"

Gyles Brandreth: It is illegal to die within the precincts of the Palace of Westminster DISQUALIFIED

Mark Watson: Pregnant women are allowed to wee in a policeman's helment DISQUALIFIED

Mark Watson: Immediately giving the number of letters in any word ('Winner')

Gyles Brandreth: Turning a banana into a pig

Holly Walsh: Taking a point from an Olympian in table tennis