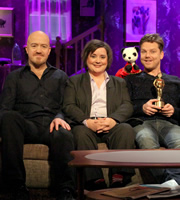 The winners this time are decided by TV legends Sooty, Sweep and Soo.

Most Deluded Group Of People

Andy Parsons has a problem at the bank