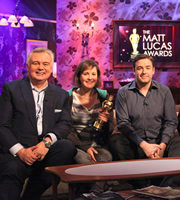 The winners this time are decided by Grange Hill legends Michael 'Mr Baxter' Cronin, Gwyneth 'Mrs McCluskey' Powell and Lee 'Zammo Maguire' Macdonald. Who will be leaving Matt's front room with their own golden Lucas statue? Only The Matt Lucas Awards has the answers.

Josie Long: Queueing on the phone

Eamonn Holmes: Identifying the films of John Wayne just by the hat he wears

Josie Long: Guessing the end of any headline from a certain type of woman's magazine