The second series of the whip-smart comedy begins. Marcus goes head-to-head with a rival, and Tim embarks on operation sabotage. 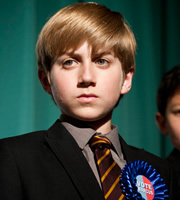 Tensions simmer at school when new boy Nick stands against Marcus for school president. Tim tries to help Marcus but, given previous form, is more likely to hinder the campaign.

Operation Sabotage is in full swing back at MI5 as Tim offers Caitlin and her presumed-dead but now actually very much alive fiancé Portis some rather dubious relationship advice.

New counsellor Owen makes an impression too, taking a particular shine to Judith.