Single father Tim quits his job as a junior sales assistant in a computer shop, and soon has an interview lined up in Westminster. After getting lost in a Whitehall building, he ends up in quite an unusual predicament...
Preview clip 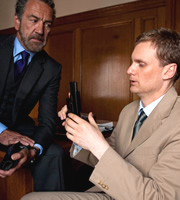 Thirtysomething Tim is accidentally recruited to be a trainee spy for MI5, a dramatic change from his former dead-end job. However, he is locked in a custody battle with his ex-wife over their son, who does not enjoy spending time with his dad, and also has to contend with his new boss known as the Examiner.