Tim's got a lot on his plate this week, thanks to a homeless Eastern European man and a social worker named Paula, who happens to be absolutely bonkers. 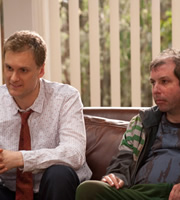 It is Tim's first day at MI5 and his mission is simple - to retrieve a red bag from some scaffolding - but an encounter with a homeless man causes him a few problems.

Meanwhile, a social worker grows a little too fond of the single father while assessing his parenting skills.