Times for Rab seem harder than ever, so he turns to a very English inspiration: Robin Hood. But Rab will be robbing from the rich to give to the scum!
Preview clip 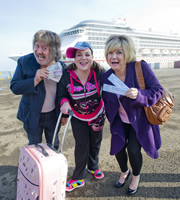 Facing hard times that are harder than ever, Rab turns to a life of crime to help make ends meet. Inspired by Robin Hood, Rab restyles himself as a new breed of heroic outlaw and hides out in a local park.

Not so much Robin Hood as Rab in Hoodie, he and his band of Merrie Men will rage guerrilla warfare against the state - robbing the rich to give to the scum.

When a local news crew take up the story, Rab's long-suffering wife Mary-Doll (or "Maid Mary-on") speaks up in support of "Rab in Hoodie" and so the legend grows...

Rab takes to the street to announce his plan to help the job market.