A Christmas special featuring the string-vested sage of Govan. It is 2008 and Rab is a changed man. He has ditched alcohol, found religion and even discovered the cooker. 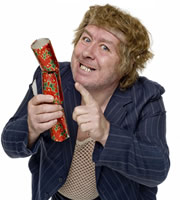 Rab appears to have changed: he's ditched the drink, found religion and even discovered the cooker. The training shoes and the head bandage might still be the same but, underneath it all, Rab is a new man who now insists: "I can get high on a sunset. I skip with joy on seeing a lark."

Rab is not the only one to have changed in the Nesbitt household... Rab's wife, Mary Doll, now has a thriving cleaning company with her old pal, Ella Cotter. The Squeaky Clean House Mice work all over the city, leaving Rab at home, preparing the scran. Mary's busy working day leaves her husband feeling seriously frustrated and he wonders if he will ever win her affections again. Meanwhile, their eldest son, Gash, has moved out of the family home, turned vegetarian and set up in business with his new wife, Lorna.

Some things never change, though. Rab's old pal, Jamesie Cotter, is still propping up the bar and chasing women. Thankfully, Rab's raging temper hasn't cooled much over the past decade, either. He's still got issues and there's plenty he wants to get off his string-vested chest.

Rab lets rip with characteristic vitriol about modern rip-offs, the media, and the state of the nation in the 21st century. His rants are as hilarious as ever, doused with a large dose of sarcasm. In the run-up to Christmas, Rab struggles to resist the demon drink. If he doesn't, the old Nesbitt we all know and love may well be back before the turkey's been stuffed.

This episode was also known as The Return Of Rab C Nesbitt.