Rab returns home to find that his wife Mary has kidnapped Chingford Steel, the government minister for work, who is on a goodwill tour of Govan.
Preview clips 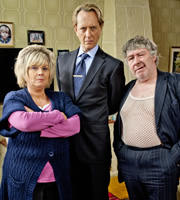 Rab returns home to find that his wife Mary has kidnapped Chingford Steel, the government minister for work, who is on a goodwill tour of Govan.

There's not much goodwill in the Nesbitt house, however, as Mary has just lost her job and decides to discuss the matter with the minister by dinging him over the head with a frying pan.

When Chingford Steel activates his official panic alarm to summon the police, Rab and Mary realise they will be arrested as soon as they let him go, so they decide to keep him. As a full-scale siege situation develops, the police inspector in charge mistakenly decides the kidnappers are terrorists and asks for their demands. This seems too good an opportunity for Rab and Mary to miss, so they 'demand' a heated towel rail and a better bus service to the town centre.

With the military and the SAS involved, things are getting out of hand.

When Rab finds himself at the centre of a siege, the police decide to play it safe and call the armed reponse unit.

The Nesbitt's issue their demands to the police while holding Chingford Steel - Minister for Work - hostage.