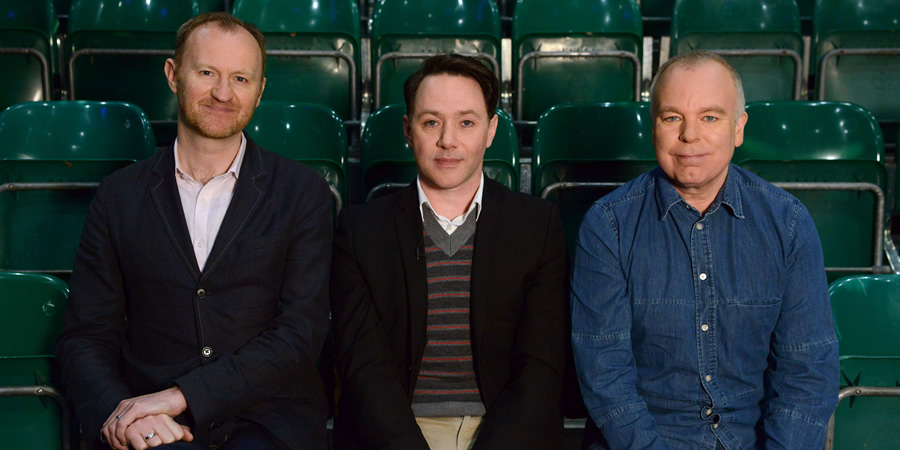 The League Of Gentlemen (Mark Gatiss, Steve Pemberton and Reece Shearsmith) present the penultimate episode of Our Friend Victoria, which explores Victoria Wood's take on Television.

Victoria Wood was a self-confessed TV addict, she'd watch anything and everything. In fact the worse the programmes were, the more she enjoyed them. She laughed at the sheer nonsense of the TV world, before turning it on itself by creating some of the most ground-breaking parodies we have ever seen on our screens.

Mark Gatiss, Steve Pemberton and Reece Shearsmith bonded at university over their love of Victoria's sketch show, As Seen On TV. The trio (together with Jeremy Dyson) hold Victoria up as one of the finest writers and comedy performers of the modern era, so feel honoured to present this programme.

This episode looks at a typical day of television from Victoria's unique perspective. The League Of Gentlemen begin by looking at how Vic blatantly parodied daytime magazine shows with Marjorie and Joan (As Seen On TV) and presenter couple, Sally and Martin (All Day Breakfast). Next up it's soaps, with the very best bits from Acorn Antiques and Vic's pitch-perfect pastiche of a 1960s episode of Coronation Street. The boys also look at Victoria's pioneering mockumentaries, which changed the comedy landscape and continue to inspire.

Contributions come from Victoria's closest friends and colleagues including Julie Walters, who recalls the fun she had playing the awful patronising women that Vic dreamt up. Long-term collaborator Duncan Preston reveals his back-up plan if his career in comedy came to an end. And former Crossroads star Kate Robbins remembers how Vic loved to hear her stories about life on the soap, then used these insider titbits in her scripts for the much-loved Acorn Antiques.

This episode is jam-packed with the very best-bits from Victoria's phenomenal canon of work making it must-see television for comedy fans.