Josh Widdicombe and Alex Brooker have landed a series for Channel 4 in which they spend the night alone in some of the UK's most popular tourist attractions, British Comedy Guide can exclusively reveal.

One Night In... will see The Last Leg presenters joined by fellow comedians as they stay overnight at an as-yet-unnamed theme park, museum, zoo, historic landmark and department store in the five one-hour episodes, airing later this year.

The commission follows the Christmas special One Night In... Hamleys, featuring Tom Allen, Rob Beckett and Romesh Ranganathan, which was watched by an audience of 2.7 million, making it Channel 4's highest rated new show of 2020.

Widdicombe and Brooker return to hosting The Last Leg with Adam Hills on Channel 4 this evening, with nightly dispatches from the 2020 Tokyo Paralympics, featuring Rosie Jones as the show's Japan-based correspondent.
One Night In... was commissioned for Channel 4 by Phil Harris, Channel 4's head of entertainment and live events, and Steve Handley, commissioning editor for entertainment.

The programme is made by Zeppotron (Would I Lie To You?, 8 Out Of 10 Cats Does Countdown), with Oli Tridgell (Bradley Walsh & Son: Breaking Dad) directing, Alex Gilman (The Ranganation, Big Zuu's Big Eats) producing, Debra Blenkinsop as director of operations, and Jodie Krstic, Richard Cohen, Ruth Phillips, and Peter Holmes as executive producers.

"We can't wait to let Alex, Josh and friends loose in some thoroughly exciting but empty, iconic locations, allowing them to roam free and muck about through the wee small hours without grown-ups interfering" said Phillips. "It promises to be a gleeful, escapist and above all funny show as the cast become the equivalent of mischievous kids in a sweet shop, who've overdone the sherbet dip dabs."

Handley added: "I'm thrilled that we are going to explore some more of the UK's most iconic venues with Josh and Alex at the helm. Viewers will be invited to a charming peek at what we never normally see of famous British attractions and Josh and Alex's friendship." 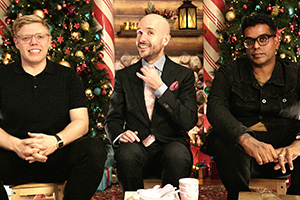