Romesh Ranganathan is to return to Sky One later in 2019 with another episode of his topical comedy Romesh's Look Back To The Future.

The topical panel format sees three guests recording predictions for news and events over the year ahead in January, then returning to the studio at the end of the year to sit alongside a hologram version of themselves, when their predictions are judged for their accuracy.

A debut episode covering 2018 was shown on Sky One at Christmas, featuring guests Richard Osman, Katherine Ryan and Danny Dyer (pictured below with their holograms).

Advertising free tickets to the recording, the producers say: "Romesh's Look Back To The Future returns! The ground-breaking Sky One comedy panel show hosted by Romesh Ranganathan is back, with three brand new celebrity guests competing to predict what will happen in 2019.

"Romesh's three guests assemble in January to film their predictions, taking on everything from Entertainment and Sport to Celebrity and Politics. When they return to the studio, at the end of the year, they will team up with their younger selves - brought to life as state-of-the-art holograms.

"But the question is - whose prophecies will come true and whose crystal balls are on the blink? Join Romesh, his three celebrities and a whole host of special guests try to predict the future."

2019 looks set to be another busy year for Romesh Ranganathan. He is due to film a second series of his Sky sitcom The Reluctant Landlord, and another series of Judge Romesh begins recording later this month.

He is also developing topical comedy show The Ranganation for BBC Two, and will return as a regular panellist on the next series of A League Of Their Own.

Sky is building a strong working relationship with Ranganathan. Tonight, Sky One begins broadcasting his US travelogue series Just Another Immigrant, and Rob And Romesh VS - a comic documentary series in which he co-stars with Rob Beckett - starts on the channel on Friday 25th January.

The second part of the new episode of Romesh's Look Back To The Future is expected to be filmed in mid December, with the resultant programme then broadcast over the Christmas season. 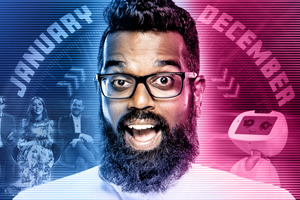 Romesh's Look Back To The Future