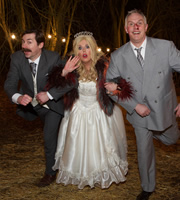 When Jo announces she's marrying a digger-driving rapper from 'pagan backwater' the Heath, it might be the first time that Dan isn't looking like he'll be the biggest catastrophe at the party.

Never one to miss an opportunity to impress Miss Lipsey, he decides to use his best man's speech to show his sensitive side, but with bizarre Heath traditions, an owl attack, and an increasingly exasperated Brian to deal with, will it even get to that?

The Wonder Stuff appeared in this episode as 8 Sausage Sunday.

Dan gets caught in his tracks.