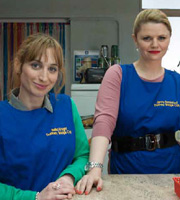 Critically acclaimed for her solo stand-up and imaginative radio sketches, Suttie is renowned throughout Britain's comedy circuit for infusing music into her material. Miss Wright, a tale set in a train station café in the Midlands, maintains Suttie's signatory pairing of storytelling with song and sees her take the lead role (and vocals) as waitress Bella Wright.

Written with Fergus March (One Man, Two Guvnors), sweetly surreal and with not a jazz-hand in sight, this is by no means a typical musical. Bella is besotted with a man she's never actually spoken to: Jim (Alex Carter, Hollyoaks), the station worker unknowingly making her heart skip a beat with every crank and splutter of his ticket machine.

After saving Jim from a commuter's travel rage, she asks him out for a drink. Colleague Jenny (Rebekah Staton, Spy) hates to burst Bella's bubble but a 'drink' isn't a date - and that's when the trouble starts.