Inter-racial romance comedy penned by Sanjeev Kohli. Siobhan quickly learns that dating a British Sikh with a fake fellow-Sikh girlfriend is nowhere near as simple as it sounds. 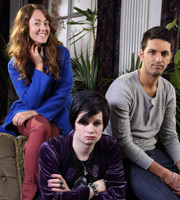 Written by Sanjeev Kohli, A Nice Arrangement focusses on Shazad Latif (Fresh Meat) as Sat and Susannah Fielding (Pete Versus Life) as Siobhan, a young couple who are planning to move in together.

But with Sat's fake girlfriend Priya, played by Zahra Ahmadi, and his mum, played by comedy great Meera Syal, to contend with, Siobhan soon learns that going out with a British Sikh has its own set of cultural issues.