Workplace comedy starring Katherine Parkinson as Jo Pepper, the put upon head of the 'Miscellaneous' department at Brewster's World Records. With a boyfriend keen to wed, a promoted nemesis and a new colleague, Jo's at a perilous crossroads. 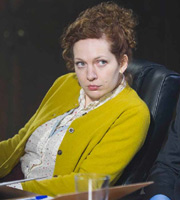 Katherine Parkinson is Jo Pepper, head of the 'Miscellaneous' department at Brewster's World Records, in a workplace comedy written and created by Bede Blake.

From the world's longest Irish dance to the longest gargle, Pepper has seen every type of record attempt imaginable. Working in 'Miscellaneous', she's a lone figure dealing with the trivial, far-out and wildly inappropriate records - and people - no one else wants to touch. But everything's about to change as she's teamed up with vacuous new partner Wick (Ian Smith, The Syndicate), who instantly becomes a stone in her comfortable shoe.

Take into account the promotion of her nemesis Cox (Emma Pierson, Dead Boss) to the flagship sports department at the top of the world-records ladder, and Pepper's thoroughly fed up. Things aren't much better at home, either, as long-term boyfriend Warren (Steve Edge, Starlings), a poet-turned-human sign, proposes. Pepper isn't ready for marriage, and as her feud with Cox escalates, she finds herself at a crossroads. Pepper needs to make her mark - she just needs to figure out how.