Aphrodite Fry, extrovert and artist, finds herself confused and outraged but feeling strangely empowered after an all-too-brief sexual encounter. How will she respond? 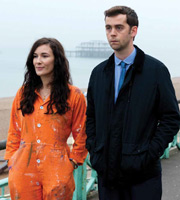 Sarah Solemani, the leading lady of hit series Him & Her, doubles as star and scribe for Aphrodite Fry.

Having written award-winning plays for the stage in London and New York, Sarah Solemani creates her first television script exclusively for Sky Living. After joining Footlights, the theatrical society at Cambridge University where the likes of Emma Thompson, David Mitchell and Simon Bird all began their careers, Solemani put pen to paper while simultaneously pursuing an acting career and has enjoyed continuous success ever since.

Aphrodite is a Brighton artist driven by her appetite for adventure and a buzzing imagination. Although quite extroverted, she has a sensitive and passionate side that is exposed through her murals. When a local businessman catches her eye, she takes him home with expectations of a fun, fancy-free night, only to be disappointed - after a quick play, he pulls up his pants and walks out the door without even a goodbye.

Confused, outraged and yet strangely empowered, Aphrodite devises a unique idea in answer to the unfortunate sexual encounter. And Bobby, the anxious, awkward colleague of the lacklustre Casanova from the night before, is her chance to turn it into a phenomenon.