Tale of male singledom and the search for romance online by three friends, written by the creators of The 11 O'Clock Show and The Big Breakfast. 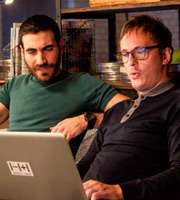 Meet George (Daniel Lawrence Taylor). He's just reached a new low in his life: he's single, lonely, and pretty sure his ex-girlfriend's sudden lesbianism is his fault. Oh, he's got a habit of creating public disturbances, too. This lonely heart is a modern man, but internet dating and listening to Mumford & Sons are two trends he's determined to buck, even if it means missing out on finding 'the one'. With such a sorry state of affairs, he's resigned to take himself off the market but, unfortunately, the women of London seem to be getting by just fine without him.

His mates are in the same boat. Jason (Brett Goldstein, Derek) is determined to win back former flame Emily by proving he's matured, while Matt (Dan Clark, How Not To Live Your Life) pours all his affection into model making. Unlike lonesome George, his pals have plans (of sorts), and although he hates the idea of online dating, he's got nothing to lose, right? Jason and Matt scour the worldwide web to find the best lines to 'embellish' George's profile and get more than a little carried away.

Producer Chris Little and director Tom Vinnicombe, the men who created cutting-edge programmes The Big Breakfast and The 11 O'Clock Show, join forces behind the writers' desk for the first time to tell a tale of unrequited and utterly impossible love from the male perspective.

The American TV network NBC is working on an American version of this episode, with Better Of Ted writer Justin Adler and Meet The Parents director John Hamburg: Story from Deadline