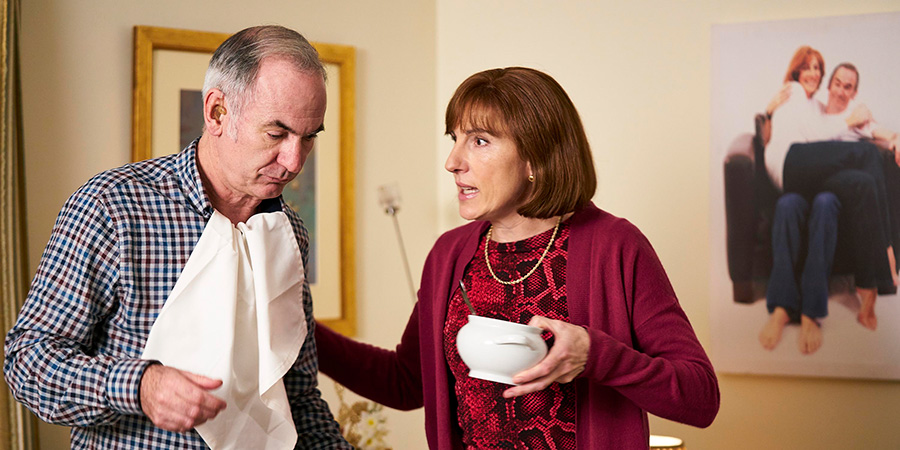 The boys have news: they've both got girlfriends. But it's probably best not to tell mum. Meanwhile, dad has a disgusting, old, battered caravan, propped up on bricks, parked in the driveway.
Preview clip

The boys arrive home discussing their latest news - they've both got girlfriends. Should they tell mum? On the one hand she will be so excited - on the other, it will be hell. Best not tell her then...

In the driveway is dad's brand-new purchase - a disgusting, old, battered caravan, propped up on bricks. 'It's a dustbin on wheels,' declares Adam. 'Dustbin on bricks,' adds Jonny.

Inside is even worse. Dad tells the boys that mum has refused to step foot in the caravan all week, and begs them to convince her to join him inside, so they can all have dinner in the caravan. The boys naturally refuse. Mum appears and tells them all to get out of the 'shithole'...

Martin's bought a grotty caravan, but he may regret letting Jim use it...

Why food fights and mayhem have become a TV treat

At a time when many of us are having to stay away from our family, it's business as usual round at the Goodmans - in other words, collective chaos.

Is there a sitcom at the moment with a stronger cast than Friday Night Dinner?

This series, where the central joke is that the whole family is forced to spend time together in a confined space, is strangely triggering during the coronavirus crisis.

The menu hasn't changed - and nor would we want it to.

Robert Popper's brilliant Channel 4 sitcom has been criticised over its run for the fact that every episode plays out the same, with Adam and Jonny arriving for a dinner they'll never eat due to a series of increasingly chaotic events. But that criticism is missing the point as it's exactly what makes Friday Night Dinner such a hit. The best sitcoms often work because fans know what to expect and the show gives it to them. While Friday Night Dinner might take this literally with its familiar beats, that's what gives Popper's sitcom its extra seasoning.

With perfect timing for these glum times the consummate sitcom Friday Night Dinner (Channel 4, Friday) returned. The set up of Robert Popper's comedy is simplicity itself. Every week, two Jewish sons return to their parents' London home for Shabbat dinner. The evening is frequently interrupted by next door neighbour Jim and his dog. Otherwise, the boys (Simon Bird, Tom Rosenthal) bicker, mum (Tamsin Greig) fusses, and dad (Paul Ritter), prone to overheating, takes his shirt off. This time there was something new on the scene: an old caravan, bought by dad because, "I went in one when I was a boy". Oh, and Jim has a new dog. Suburban comedy at its best.

Friday Night Dinner: Am I turning into Jackie?

Friday Night Dinner is back for a sixth series - and it's the perfect lockdown binge-watch, says Keren David.