Series 8 - A Juicemas Carol - Chapter One 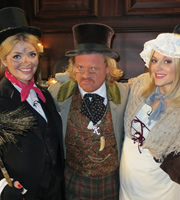 In Victorian London, Ebenezer Lemon is meanly going about his business, ensuring the continued misery of the local chimney sweep and his faithful washer woman, played by Holly Willoughby and Fearne Cotton respectively.

The ghosts of Christmases past, present and future - who all bear a striking resemblance to The Only Way Is Essex's Mark Wright - arrive just in time to show Ebenezer how low he has sunk.