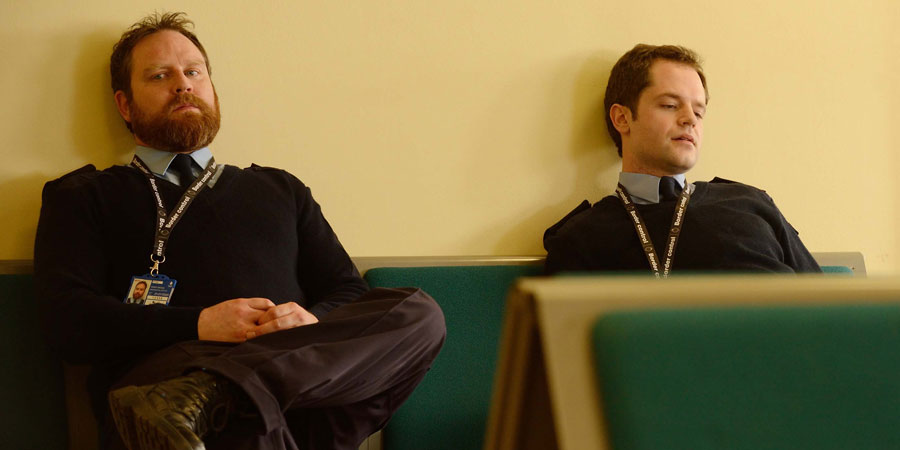 The regular flight schedule into Northend Airport is suspended, and a special guest is in the building, in the form of Detective Terry Bradshaw from the London Met.

The regular flight schedule into Northend Airport is suspended, and a special guest is in the building, in the form of Detective Terry Bradshaw from the London Met. This silver-tongued, handsome charmer takes the morning briefing, and explains that a renowned international criminal has been extradited back to the UK, and will be landing at Northend later today, at which point Terry will then escort them down to London. All he needs is someone to stamp the criminal's passport.

No one is more excited than Clive, who has always dreamed of being a policeman - saving lives, going on stakeouts, saying "10-4" without knowing what it means. Proctor, meanwhile, is just thrilled that she is no longer the one in charge, as everything, for today, must go through Terry. She puts her feet up and abdicates all responsibility.

Terry shows his true colours when he cruelly dismisses the ever-keen Clive - though Clive is too optimistic and naive to realise it. Tariq sees though the facade and is less than thrilled at Terry's presence in the office, not least as he is uncomfortable with the detective's interest in Andy. In a rash moment, feeling angry that Andy seems to be falling for the detective's sleazy charms, Tariq decides to call his ex-girlfriend, Monica.

The moment of truth arrives when the criminal comes through passport control, and just when all seems to be going wrong, Clive saves the day, leaving Terry with egg on his face.

As the team leave, Andy tells Tariq she was never interested in Terry, but the conversation is interrupted by the surprise arrival of Monica, who has turned up early for their date. It's a bit of a nightmare for Tariq, but it's a problem of his own making, so now he has to deal with it.