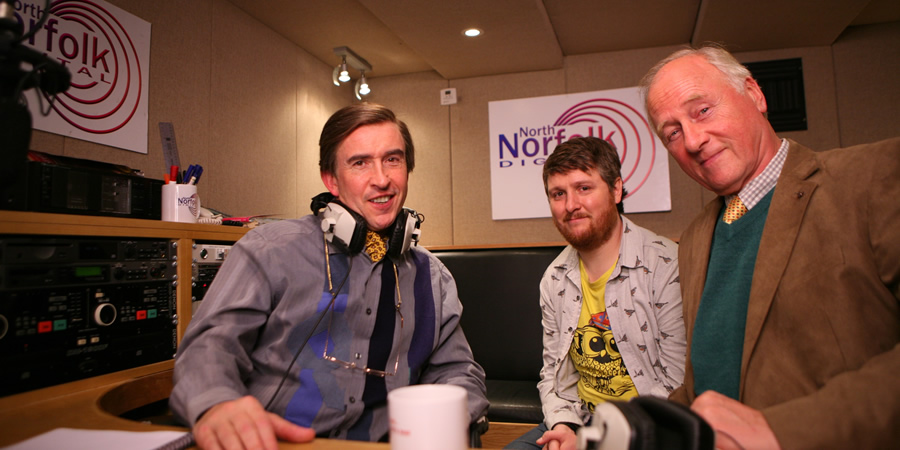 Norfolk's favourite... well, North Norfolk's favourite regional, non-drivetime radio presenter returns to the airwaves, as Alan Partridge brings you all the important news, gripping debates, and generally accurate traffic information of the day, along with a healthy dose of top quality banter.

Even with Alan's many talents, he can't present such an entertaining and informative show alone, so it's good news to hear Sidekick Simon has officially been rehired and is back to fulfil his sidekick duties (on a probationary basis).

We rejoin Alan as he covers hard-hitting topics such as Jimmy Saville and corner shops that unscrupulously sell multipack cans of fizzy drinks, before he invites a member of the North Norfolk Hunt into the studio for a compelling debate on fox hunting.

Can the traditionally pro-Countryside Alliance Partridge impartially present a robust argument for animal rights activists? More to the point, who are more efficient hunters: the North Norfolk Hunt or Alan's LazerQuest team?

Alan Partridge says: "The screening of Mid Morning Matters on Sky Atlantic sees the coming together of two powerful ideas: 'Believe in Better' (Sky) and 'Be the Best' (Alan Partridge). Two compelling brands with two equally valid mission statements, although if we're being honest 'believing in better' isn't as impressive as 'being the best'. ('Being' feels more emphatic than just 'believing' while the 'best' is by definition one up from 'better'). I'm not going to get into a debate about it though. That's part of what 'being the best' is. Thank you for your time and I urge you to enjoy the series."

Hymn of the day

Alan sings for his listeners.