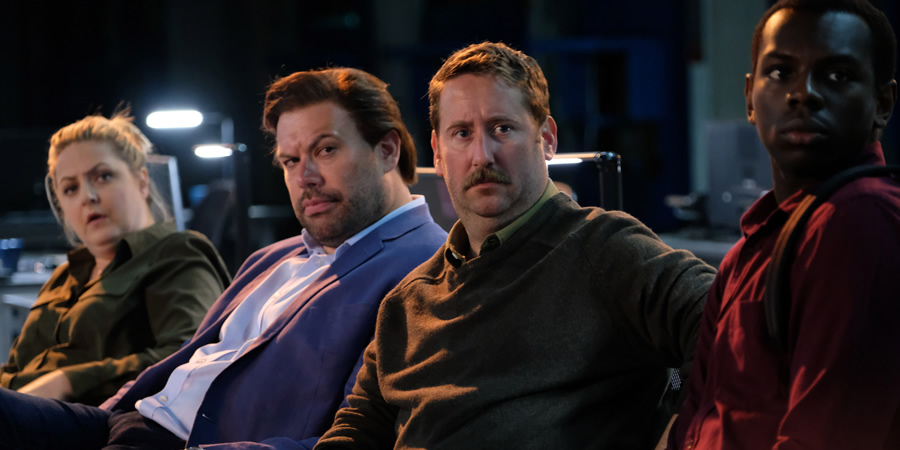 Co-creator Tom Davis says they've essentially aimed to make a "very silly version" of shows like Line Of Duty and The Night Manager. 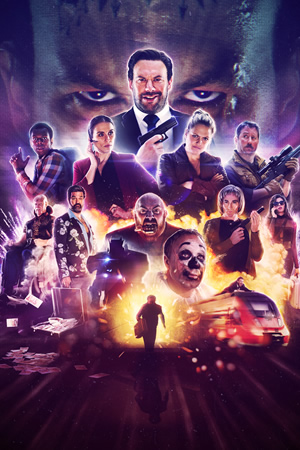 Those two particular dramas are well linked to Action Team actually. Davis had experience of The Night Manager having acted in it ("but I got cut!") whilst Vicky McClure has been temporarily 'borrowed' from Line Of Duty to star as Action Team's no-nonsense boss at MI6. With the help of her slightly mysterious admin assistant Anne (Derek Riddell, last seen in gritty dramas Hard Sun and The Missing but in a very different role here), Ruth Brooks must guide the team as, across six episodes, they attempt to bring down a criminal network masterminded by the evil Vladimir Schevchenko (Tom Davis again, in heavy make-up).

Howick says: "It was a dream really to do this sort of show, which explores this level of action. For most comedy types that's never on the cards." It is certainly not a normal 9-5 job. "It was funny, as when ringing my wife she'd say 'what's the kill count today?'"

Laura Checkley relished taking on the role of Monica, although is keen to point out in real life she doesn't aim to sleep with everyone she meets like her character does. She had some gear shifts to make to get into the Action Team mindset though, having come from the set of low-key sitcom Detectorists. "This is much more by bag performance wise, getting to be a bit broader, bigger", she admits. "You have to be very subtle in Detectorists. When I first did Detectorists I was like 'oh my god, everyone is so small, I'll have to reign it in here'. So this is a dream job of getting to shoot guns, kick some arse... very different!"

Kayode Ewumi, who first broke on to the comedy scene via the hit YouTube series #HoodDocumentary, says playing naïve work experience boy Huxley made him "feel like a renegade". Before they started filming, the actors also had time to workshop their characters, which he appreciated. "It's a nice feeling to be able to experiment."

Astute readers may have noticed that the character of Anne is played by a male actor. What's the story there? Derek Riddell is keeping the answer close to his chest, but revealed to us: "I think you can work out from the first episode there's a bit more to her than first meets the eye. I'm not allowed to say where her journey goes, but you can tell she's up to something.

"The first episode is shot in such a way that you never quite see me fully and so there's an air of mystery to Anne about what she's about. Is she a woman or is she not?"

The production team invested a lot of effort into ensuring his character "didn't just look like a guy in drag". He confirms: "The make-up and wardrobe departments really spent a lot of time trying to feminise me as much as they possibly could, which I think they did a pretty good job of!" 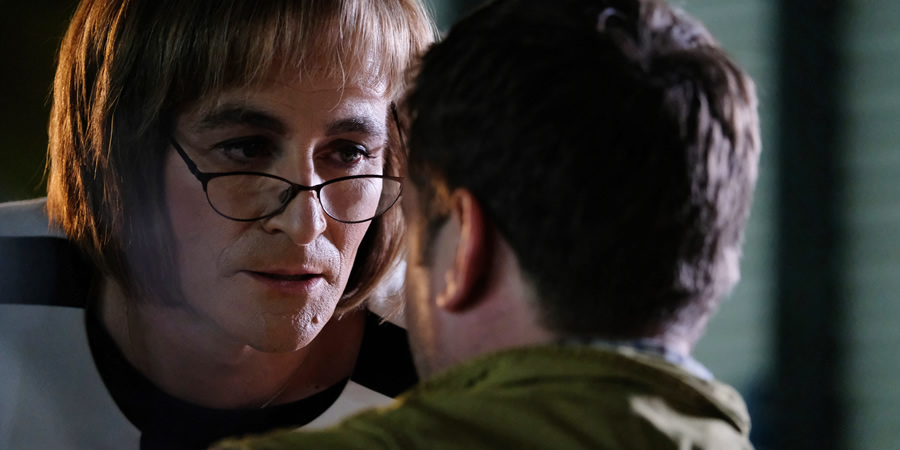 A primary aim of the production team was to try and get the series looking as much like an action movie as possible. The creators even went to ITV to seek permission to film the show in a particular panoramic view that comedies don't normally get to use. As a result, viewers will be treated to some big explosions in a cinema style.

To achieve some of the effects, the production team and cast had to move to Bulgaria for a month. Talking about why they picked that country, Davis explains: "You can literally just blow up a whole building. You get a little bit more bang for your buck, literally!"

However, whilst in Eastern European, the cast discovered that the local filming procedures were slightly more 'lax' than they had become accustomed to in the UK. Tom tells this story: "We were filming the bit in Episode 1 where Graham is looking out the window with his gun. He's basically looking over the biggest square in Sofia, with a sniper rifle. We were filming this three days after the Vegas shooting. Jim was going 'Did we tell people that I'm up here?', so I turned around to the location guy and went 'Jim is a bit worried because he thinks people might get scared because they don't know he's an actor, can you tell him everyone has been informed?'... and this guy went 'Er...'"

The cast also had to do some of their own stunts. One of which involved Kayode Ewumi driving alongside a moving train with Jim Howick in the passenger seat. Kayode didn't make it easy for his co-star: "What happened was I got in the car and Jim said 'Kayode, you drive right?'... he kept asking me, and I was like 'no, no, no' each time", however it was all fine really: "I was just relaxed, and said 'whatever'... because I can really drive!" As viewers will see on screen, it went smoothly. "We did it once... and I was like 'we're all good, finished!'" Jim admits: "I was shitting myself!" 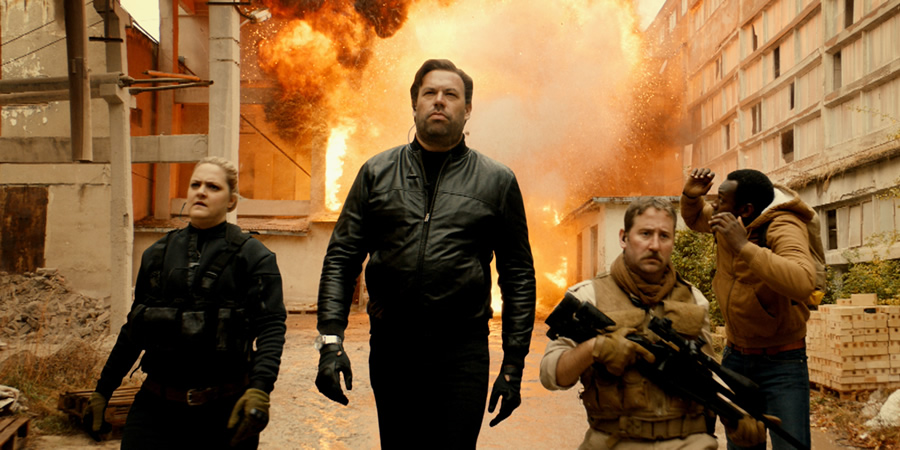 With a number of pages of dialogue to film and at least one big stunt every day too, it meant some long working days in the country for the cast and crew, leaving little down time. Jim says: "It was impossible to cut loose really. Tom, it has to be said, worked harder than I think I've seen anyone work on a show before. It was insane."

Normally it can take a whole day to film an action scene, but Tom explains they had to often work quicker: "There's a scene in Episode 6 where I'm fighting myself [Logan versus Vlad], and we had to do that in three hours. It was pretty intense, but I can't really complain as I wrote it. I think we all had fun!"

The long days meant there wasn't much chance to party in the evening. Laura says: "You wouldn't want to do that show on a hangover!". Jim picks up this thread: "Someone related to the production came out for the last week and they were encouraging us [to go partying]: 'Come on guys, what's wrong with you? You're so boring...'. We were all dead!"

Their accommodation wasn't the best either, with Laura likening the hotel they stayed in during the final week to something like out the film The Shining.

Davis has a good story about the hotel's customer service. "I went into my room and someone, a previous guest, had made a 'deposit' in my toilet. I had to go down to reception and say everything in the room had been cleaned apart this 'thing' that's in the toilet. She was like, 'this is really embarrassing, we will sort that... tomorrow'. After a 14 hour working day, I was so tired I just went to my room and went to sleep. The next day I woke up, went to set, and when I came back in the evening it was still there! They'd made the bed, they'd hoovered... but did they think I liked it so much I wanted to keep it?"

Not everyone had it hard in Bulgaria though. The other cast members point out Derek "had a holiday" whilst he was there. The actor admits: "I did have quite a lot of downtime, it was just the way the schedule fell", but he points out it wasn't as fun as it sounds. "I don't know if you've been to Sofia? It's probably very nice for a long weekend, but you do kind of run out of legal things to do quite quickly! My last day off, I remember thinking 'I can't walk down the main street in Sofia again, I can't do it'... so I just watched the entire series of Mindhunter on Netflix in my room!" 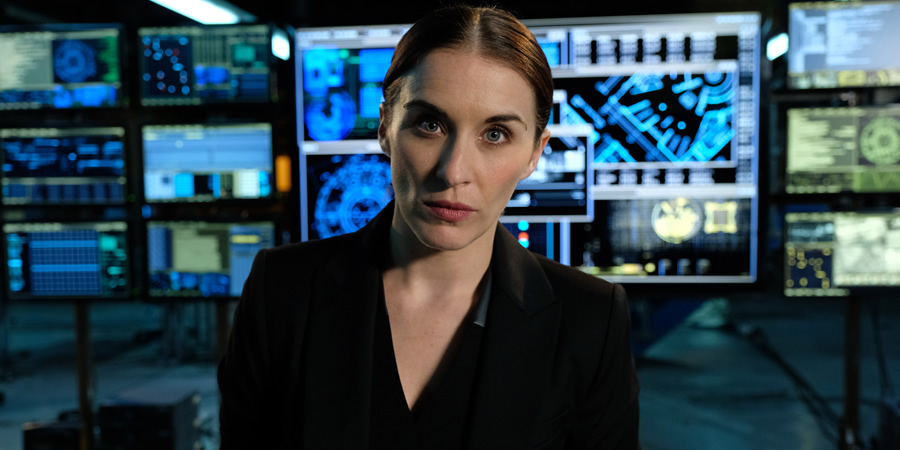 With Vicky's character being based in London, she managed to avoid having to travel to Eastern Europe entirely, although she was offered to visit. Tom jokes: "Vicky was actually, weirdly, saying 'I can't get to Bulgaria' but then when I was like, 'actually, we might be doing a couple of scenes in Greece', she suddenly was saying 'I'm around!'." Vicky confirms: "They wound me up telling me we were going to Greece, and we weren't!"

Despite the intensity of the workload, the creators are clear they'd love to make more, and have added "a bit of a cliff-hanger" in Episode 6 to leave the option open. "It's a joy of a thing to write and it's been a lot of fun making it with these guys; so hopefully long may it continue..."

In the meantime, perhaps there's scope for the Action Team to appear in the other projects the cast are working on? Kayode revealed to BCG that a series commission for his BBC Three sitcom Enterprice is in the bag. "I'm just writing that now. I'll write everyone a part!"

Meanwhile Vicky is returning to Line Of Duty, and promises to ask if Action Team could pop up in the background. Meanwhile Jim is "being a druggy" on Wannabe, the new sitcom from People Just Do Nothing's Lily Brazier and Steve Stamp.

What about Murder In Successville though? Might Davis return as DI Sleet? "I dunno, it's sort of a weird one, because for us to grow the format... We've done three years of it. We've got a few offers out there to supersize it, it's just working out how we do that. Some crazy people [in terms of star name profiles] want to do the show, but it's working out what that next move is. But also hopefully there'll be more Action Team because it's something we've spent a lot of time writing, and we're very obsessive with it."