A Touch Of Cloth II: Undercover Cloth, Episode 1 - Part One

Cloth has quit the force, never to return. Well, until a bank robbery goes wrong. But things are awkward at the station, particularly with ACC Tom Boss back at work.
Preview clip 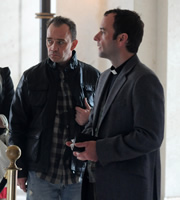 Cloth is done. The brilliant but tortured detective has quit the force, never to return, completely out of the game. Well, until a bank robbery-gone-wrong brings him back into play.

Things at the station are a tad awkward, though, what with his on-off relationship with partner Oldman, not to mention ACC Tom Boss, the man who killed his wife, reinstated after a successful stint in rehab. In fairness, he hasn't slaughtered anyone in months.

More pressing matters are at hand, anyhow, when Cloth is tasked with going undercover to bring down Macratty - a very bad man - and find out what his next job is. Wannabe Mayor Hope Goodgirl is added to the mix as well, and she's taken a shine to Oldman.

A Touch Of Cloth 2 Trailer

Booze addled and widowed loner DCI Jack Cloth continues his struggle to hold himself together while solving grisly murders and suffering from the death of his wife.