A Touch Of Cloth III: Too Cloth For Comfort, Episode 1 - Part One

DCI Jack Cloth's brother, Terry, has been killed. The pair weren't close, in fact, they were estranged, but, you know, it still hurts.
Preview clips 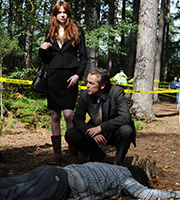 It took DCI Jack Cloth a while to come to terms with his wife's murder - he barely remembers her name these days - and now he's hit with the news that his brother, Terry, has been killed. The pair weren't close, in fact, they were estranged, but, you know, it still hurts.

Clues lead Cloth and co to a small English town called Funtcuck and a weird rehab/spa retreat where Terry was receiving treatment for anger issues against a certain sibling.

Owner Damien Vull is fast-tracked to the top of the prime suspect list - the man does love a sacrificial ceremony, albeit without the sacrifice bit - but, when the body count starts to rise, Cloth realises that the culprit is closer to home.

A Touch Of Cloth 3 - Preview

Detective Kerry Newblood has found something of note at the murder scene. Warning: this scene contains a mild spoiler.