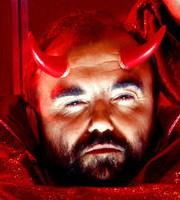 Satan was once an angel, however he was cast out of Heaven and into Hell, with half of his body turned into a goat, after he rebelled against God (although he claims that it was more of a 'management restructuring exercise').

Nowadays, Satan has problems with Hell's over-crowding due the increasing number of sinners. He spends most of his time arguing that humans are fundamentally evil, while also mourning over the loss of his angelic form and trying to prevent as many people as possible from entering his cramped domain.

The Professor is without a doubt the nicest man ever to end up in Hell. He lead a clean and righteous life. However, he did have one fault while he was alive: he was an atheist. His lack of belief resulted in him being cast into Hell.

The Professor believes that humans, while being bad quite a lot of the time, are basically good. As a result, he and Satan often fight with each other due to their views on humanity.

Thomas Quentin Crimp is probably the evilest human ever to have lived. He is a man with no morals whatsoever. He cheated, lied and murdered during his time on Earth. His sins included collecting money for orphans and keeping it for himself, and voting for Margaret Thatcher while telling people he had given the Liberals a try. The only reason Satan gives for why Thomas never killed more people was because he never got around to it while he was alive.

He died in the car crash which also killed the Professor. Part of his punishment is therefore to be locked up with him. He also has his own private punishments such as being transformed into the microbe that causes amoebic dysentery and then being put into the bowels of Robert Maxwell.

During the first series, Gary was Satan's assistant. Part of his duty was to torment Thomas. This plan backfired after Thomas persuaded him to rebel and to try and overthrow Satan as ruler of Hell.

The stupid and sycophantic Scumspawn replaced Gary as Satan's assistant. He gets his name because he is covered with boils, puss and all manner of vile disfigurements.

Scumspawn's main problem is that he is too kind to everyone that he meets, resulting in him being the least demon-like demon in the underworld. Thomas tries to help in him in being more evil, while in return Scumspawn and the Professor try to make Thomas a better person.

Edith was one of the greatest historians in the world, as well as an Olypmic athlete and a humanitarian. When she died, she ended up in Hell and learnt from Satan that the police reported that she committed suicide. She is not convinced, so asks that Satan finds out what really happened. In return, Satan asks her to write his life story.

Edith's main problem in Hell comes in the form of her ex son-in-law: Thomas. He divorced Edith's daughter and tried to get custody of her breast implants.