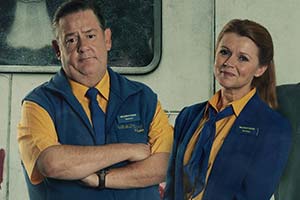 With the aid of just one chair, a pair of clip-on spectacles, some Aviators and a visor, Mike Wozniak and Henry Paker play out the tale of Roy.

A great cast is well-served by a strong script by Ben Boyer.

The end of the fourth series of Man Down had plenty to get your teeth into, with chaos, comedy and pathos all thrown in.

Greg Davies returns for a fourth series of Man Down and I sense a bit of a theme emerging. He has previously had a run-in with a turkey and in the first episode of the new run of this tragic, anarchic sitcom he has an oversized chicken thrown at him. But that is just a small indignity compared to some of his other issues in this opening instalment.

Alice Lowe's smash hit film Prevenge is released on DVD and Blu-Ray in the UK on 5th June, which gave TVO an ample excuse to revisit a film we'd previously called "a startling debut from an incredibly talented individual".

Despite what might be implied by its title, Prevenge will still no doubt present something unexpected to most: the first pregnant serial killer the big screen has ever seen. Gore, horror and psychopathy meet the viewer through a deadpan, blacker than coal, comedic lens.

Featuring a cast primarily made up of TVO regulars, and with Alice Lowe writing and directing as well as leading that incredible cast, we were naturally very keen to see it. Our editor, Paul Holmes, shares his thoughts below...

Prevenge was screened in the 'laughs' comedy strand of the London Film Festival, but the humour in Alice Lowe's directorial debut most definitely of the jet-black tone. Its tone is bleak and unnerving, with only the occasional dry comic moment offering relief from the brutal actions of its serial-killing anti-heroine, Ruth.