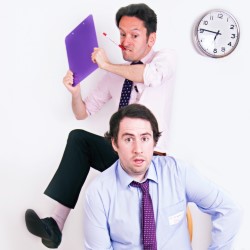 Ste and Dave In Training is a brand new character comedy show, written and performed by Ste Johnston (Channel 4's No Offence) and Dave Jackson (ITV2's Bad Bridesmaid). It sees three not so ordinary training sessions take place, and features lots of audience participation, singing, dancing, a puppet-monkey and even a chance to play your cards right!

Ste Johnston returns to comedy performing after his part in the Channel 4's critically acclaimed series No Offence.

Inspired by old school music hall, and the comic style of Les Dawson, Tommy Cooper and Bruce Forsyth, Ste & Dave In Training sees audiences participate in three unorthodox training days, with characters from two frail and fading ex-actors to two frustrated road safety officers. Audiences get the chance to win a free shot in "Play Your Cars Right" and unleash their anger by throwing balls at Shirley Bassey, in "Bassey's Bucket".

The show opens with Alan and Alun running a speed awareness course, but unlike Kevin and Sally in Glasgow, who stick rigidly to the powerpoint, Alan and Alun are dedicated to giving their group of road traffic offenders the best time they possibly can. With a worryingly lax attitude towards drink driving, they turn the training session on its head, with audience members playing classic quiz show games to wipe the points from their license.

Former actors Pilburn and Jonty then take audiences through how they have healed the stars, from "our old Judi" to little Tom Cruise. Their healing hands and tantric tapping work a treat on stage fright. And when the tapping doesn't hit the mark, audiences get their hands on Pilburn and Jonty's balls, in the game "Bassey's Bucket".

In the final training session, the audience are transformed into struggling and overworked teachers. Enter Titch and Kelvin, who use their own experience as former young offenders to help these poor teachers with classroom management - but as Titch says 'it's not the classroom that's the problem, it's the little b**tards inside it!'