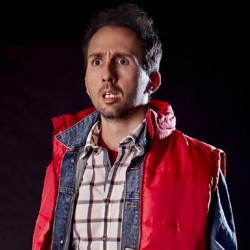 If your life had a sequel, would it be better, or would you waste that second chance on a story with no soul? Malcolm Hardee Award nominee and Best Show winner Buxton Fringe 2014 presents the second part of the trilogy of new shows for 2015. 'A great comedian. His rapport with the audience is instant and constant ... Nathan Cassidy seems like becoming a firm favourite' **** (BroadwayBaby.com). 'Gloriously entertaining' (Chortle.co.uk). 'Great jokes with an easy, confident manner' (FringeGuru.com). 'Moments of genuine raucous laughter and some great gags' (Skinny). 'Astonishing, tear-inducing' (Fest).

Back to the Future II: if your life had a sequel, would it be better, or would you waste that second chance on a story with no soul? Award-winning comedian Nathan Cassidy is in the middle of his life, but is there a next life, and if there is, who cares if we mess this one up? Don't mention mid-life crisis, that doesn't exist! Join Nathan for a late-evening journey into the past and future as he explores reincarnation, sequels and second chances, and on the stroke of midnight, like Marty McFly crossed with Cinderella, things are gonna get seriously messed up.