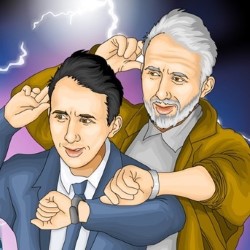 Malcolm Hardee Award nominee and Best Show Winner Buxton Fringe 2014, in the first of a trilogy of new solo shows for 2015. After a chance encounter with Doctor Emmett Brown, Nathan realises there is only one thing that has really changed over the last 30 years. It isn't flying cars. And it's about to ruin all of our lives. 'Cassidy creates great energy on the stage, building an immediate rapport with the audience. Cassidy hits it on the nose ... a must see show' **** (CoolAsLeicester.co.uk, 2015). 'A great comedian' **** (BroadwayBaby.com).

Back To The Future I: After a chance encounter with Dr Emmett Brown, Nathan realises that only one thing has really changed over the last 30 years - it isn't flying cars, and it's about to ruin all of our lives. But maybe if we all come together we can stop it, with a little something Nathan has invented - time travel! Travel with Nathan 30 years into the past, and then into the future as he attempts to save us all.