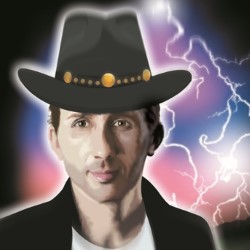 Malcolm Hardee Award Nominee with the final part of this year's solo show trilogy. What happens when you run out of ideas? You wear a cowboy hat, put on a silly voice and repeat the old sh*t. The best of Nathan Cassidy 2010-2014 (in Brummie). 'High in originality, entertaining and well thought through' (BroadwayBaby.com, 2010). 'Could be amongst the most astonishing, tear-inducing sights on the Fringe' (Fest, 2011). 'Moments of genuine raucous laughter and some great gags' (Skinny, 2012). **** 'A great comedian' (BroadwayBaby.com, 2013). Best Show Winner, Buxton Fringe, 2014.

Back to the Future III: what happens when you run out of ideas? You wear a cowboy hat, put on a silly voice and hope nobody notices it's old sh*t. The best of Nathan Cassidy 2010-2014 (in Brummie). For 30 years, Nathan has been keeping a secret, hiding from the past, and not just his real accent. In this final one-off Fringe performance of the 2015 solo show trilogy, the truth is revealed, the driving force behind all three shows and all the ones before, as he attempts to go back 30 years to his Birmingham school, change the past and secure a brighter future.