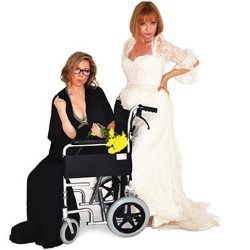 Two divorces, a rare autoimmune disease and both becoming single mums wasn't part of the life plan. In this hilarious look at their lives, finding the funny in the darkest of moments, the sisters re-examine what makes them happy. **** (Scotsman). **** (Herald). **** (Times). 'Gavin & Gavin are definitely not ladies, and praise the Lord for that. For those of us who appreciate comedy as the art form it is, it's inspiring and refreshing to see these sisters doing it for themselves' **** (Metro).

Life doesn't always turn out how you hope. Two divorces, a rare autoimmune disease that left Sharon at her lowest in a wheel chair and both becoming single mums wasn't part of the Gavin sisters' life plans. In this honest look at their lives and Sharon's desperate attempts at getting better including a visit to a physic surgeon in Brazil, the sisters find the funny in the darkest of moments and re-examine what makes them happy.

Based on real life experiences, the show is written by sisters Lauretta Gavin and Sharon Gavin, from the comedy double act Gavin & Gavin. The duo have previously written and performed in four highly successful Edinburgh shows with transfers to the West End, Soho Theatre and nationwide. They currently have two sitcoms in development with Channel X, Concrete Heads based on their family's construction business and Darts Wives, based on their Edinburgh show in 2013.