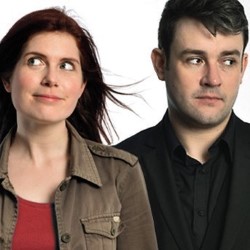 Paul Foxcroft (Cariad & Paul; Drifters, E4; professional liar) and Briony Redman (Radio 4 Writer; Farce Noir; Buffy wannabe) are a double act with more sketches than you can shake a stick at. But why would you shake a stick at sketches? Sketches aren't a dog. Though if we had a dog, we'd call it Sketches. 'A vibrant, articulate sense of mischief... Inventive, scrappy, proper Fringe fun' (Times). 'A delightful romp with universal charm and wit... nerdy without being exclusive' **** (EdFestMag.com). Directed by David Reed (BBC's It's Kevin; The Penny Dreadfuls).

Paul Foxcroft and Briony Redman are a Times Critic's Choice double act with more sketches than you can shake a stick at. But why would you shake a stick at sketches? Sketches aren't a dog. But if they had a dog, they'd call it Sketches.

Surname & Surname debuted in a tiny room on the Free Fringe in 2013 to critical acclaim. They have worked together in several guises for years; in sketch group Ladies & Gentlemen with Joseph Morpurgo (Scotsman's Top 10 Free Shoes 2012); in multi-award winning improv teams Monkey Toast and Grand Theft Impro; as guest cast in Austentatious and in the 50 Hour Improvathons and sell out play Farce Noir (2013).

Their first sitcom script together has been optioned and is in development.

They're directed by David Reed (The Penny Dreadfuls; It's Kevin, BBC).

Briony has written on Laura Solon: Talking and Not Talking (Radio 4), Laurence & Gus: Hearts and Minds (Radio 4) and was shortlisted for the BAFTA Rocliffe New Writing Forum at the New York Television Festival. She was also a Finalist in the Red Planet Picture Prize 2010. Forget Me Not, a short which Briony wrote, produced and starred in this year secured her a Best Actress nomination at Houston Comedy Film Festival.

Paul's recent TV credits include Drifters (E4). He was a finalist in Just for Laughs International Comedy Festival scriptwriting competition and his material has been broadcast on TV and Radio in Canada. Paul created and stars in sell-out improv hit Cariad & Paul: A Two-Player Adventure with Cariad Lloyd.