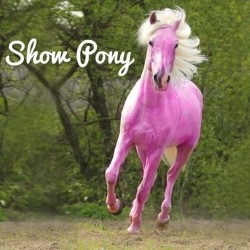 Eamonn is a disillusioned ex-pantomime horse searching for his destiny. Join LetLuce for more anarchic joy in their new show-cum-quest. Think Mighty Boosh meets French and Saunders. 'You're in for a bonkers hour...together they are dynamite' **** (TheGoodReview.co.uk). 'Bizarre and mental executed with comic flair...not like anything we've seen before' ***** (SoSoGay.co.uk).

LetLuce, a surreal, anarchic and charming comedy pairing made up of Lucy Pearman and Letty Butler, return to Edinburgh with their second Fringe show, Show Pony.

Letty and Lucy play Eamonn, a disillusioned pink horse (designed by Helly McGrother of Spitting Image) searching for his destiny and meeting a host of titillating and interesting characters along the way. Expect very funny and totally daft joy from LetLuce who have a myriad of comedy influences from The Mighty Boosh to French and Saunders. Directed by Matt Peover (Nick Helm's This Means War, Mike Wozniak & Nick Mohammed).

Letty and Lucy met at LAMDA where they were regularly cast opposite each other and spent a lot of time attempting to be serious. Letty's credits include two series of CBBC's Young Dracula and she has just finished filming the third series of Disney Channel's Wolfblood. She is now like the pied piper of twitter except with children, not rats (in a non spooky way). She also plays series regular Carol in Radio 4 comedy My First Planet.

Lucy is from an actual farm. Credits include The Bill shortly before it was axed (possibly her fault) and she played Katherine Parkinson's twin in Laura Wade's play Extra Ordinary. While growing up, when not herding pigs, Lucy watched and loved Russ Abbott, Smack the Pony, Murder most Horrid and Harry Enfield. Letty, when not at the orthodontist, watched a heady combination of Only Fools and Horses and Faulty Towers.

Letty and Lucy appeared in the ad campaign for Silverspoon's Truvia directed by Steve Bendelack, (The Mighty Boosh; League of Gentlemen). They also starred in the Maltesers Teasers advert directed by James Griffiths (Director of Cuban Fury, Episodes, Up all Night).

They are currently developing a television pilot with Moxie Pictures, which will be directed by James Griffiths and produced by Claire Jones (Sightseers, Kill List). LetLuce are also collaborating with Victoria Pile and the writing team behind Green Wing on a separate screen project.