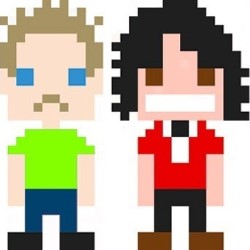 Total sell-out show at the 2013 Edinburgh Festival Fringe, and every month in London since. Video games and comedy combined, plus live battles between comedians (and you!) on classic games! It's like GamesMaster off the telly, but drunk. Previous guests include Josh Widdicombe, Tony Law, Nick Helm, Brendon Burns, James Acaster, Sara Pascoe. 'Ridiculously fun, whether you're a gaming nerd or not.' (Time Out Pick of the Month and Critic's Choice). Praise for award-winners, McNeil and Pamphilon (BBC One, BBC Three, MTV, E4): 'An unusually high standard of innovation and comic writing' (List). 'Hilarious' (Guardian).

Stand-up, sketches and songs, plus live battles between comedians and audience on classic games! AND the entire audience plays along on specially created technology using their own smartphones!

The smash hit show, a total sell-out run at EdFringe 2013 (including a sold-out extra show added due to popular demand), and total sell out run in London every single month since September 2013, explodes back into the Fringe for four nights only. Limited Run. Big fun.

McNeil & Pamphilon are Steve McNeil and Sam Pamphilon, who have starred together in Radio 4's Sketchorama and three sell-out Fringe sketch shows before creating Go 8-Bit.

The critically acclaimed double act (who have been compared by critics to everyone from Morecambe & Wise and The Two Ronnies to The Mighty Boosh and Reeves & Mortimer) will be teaming up with (and battling against) some of the Fringe's biggest names.