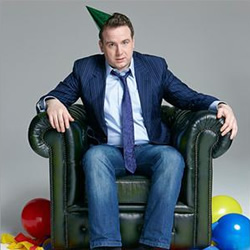 On 18 September Scotland decides its future. Matt Forde will interview a leading politician from both sides of the debate, in two special shows. These promise to be unique events, and follow on from a complete sell-out London run.

On 18th September Scotland decides its future. In two special Political Party Podcast shows, Matt Forde will interview a leading political figure from both sides of the debate ahead of the Scottish independence referendum. On Monday 18th August Matt will be joined by former Labour MP, Big Brother contestant, poll tax protestor and all-round firebrand Tommy Sheridan who will be voting 'Yes' to independence. On Wednesday 20th August Jim Murphy MP from the 'No' campaign will be Matt's special guest. Jim served in the Cabinet as Secretary for Scotland under Gordon Brown and is currently the Shadow Secretary of State for International Development.

The Political Party Podcast has had over 100,000 downloads and was named one of the Telegraph's 'Best Comedy Podcasts' , The Times 'Podcast Of The Week' and has hit the top spot on the iTunes comedy chart.

Matt Forde's London show, The Political Party, has been a sell-out during its monthly residency at Westminster's St James Theatre.

Matt Forde, a Labour-advisor turned stand-up comedian, is a frequent guest on current affairs shows. He has been a panellist on Have I Got News For You (BBC One) and 8 Out of 10 Cats, a sofa guest on This Week (BBC One), has appeared on Newsnight (BBC Two), Daily Politics (BBC One) and has performed stand-up and written for Russell Howard's Good News (BBC Three). Other writing credits include 8 Out of 10 Cats (Channel 4) and The Last Leg (Channel 4). Matt can be heard on the radio on The Now Show and The News Quiz (both BBC Radio 4) and on his own weekly show on TalkSPORT. MATT regularly reviews the newspapers for Sky News and has contributed to features on ITV's evening news.