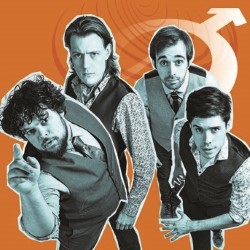 Chortle Award nominees, stars of Radio 4's Sketchorama and five sell-out Edinburgh Fringe runs in four years, the critically-acclaimed sketch storytellers present Happenstance, a show where things happen. The Betas are back with another 'hilarious sketch show' (Sunday Times) and brand new characters, as they breathe life into a new world of stories with heart. This year things are going to happen... 'Genius' (Sunday Times). 'Gloriously funny' **** (Time Out). 'A furnace of invention' **** (Chortle.co.uk). 'A mastery of, and love for their craft that is a delight to behold' **** (Fest).

The Beta Males are writer-performers John Henry Falle, Adam Blampied, Richard Soames and Guy Kelly. The Beta Males began life when Adam and John Henry started making comedy in their homeland of Jersey when they were just teenagers. They have gone on to sell out their last five Fringe shows as well as London's Soho Theatre, London Pleasance's Main House and the Leicester Square Theatre. They have worked regularly with writer Tom Clarke and writer-director Robert Pirouet and this year esteemed Young Vic, RSC and Pappy's director Russell Bolam has taken charge! As well as Happenstance, the Betas will be performing in their own solo shows at this year's Fringe as part of The Beta Males' Sessions... and Guy and Richard are also appearing in McNeil and Pamphilon Go 8-Bit!

John Henry Falle
Actor, writer, comedian and improviser, John Henry's solo acting credits include The Tape Face Tapes (BBC Three) and he will be co-starring in the upcoming feature film Bill, from the team behind Horrible Histories. Womble, the debut short film co-written by John Henry and starring Will Smith and Ben Willbond was short listed for the Discovery Award at the London Comedy Film Festival and premiered at LOCO at BFI.J. He was trained in Chicago-style long form improv by a Second City alumnus and is performing 30 minutes as his bardic alter-ego, The Story Beast.

Richard Soames
Actor, writer, comedian and improviser Richard Soames solo acting credits include several commercials, Made for Each Other (BBC Three) and Forget Me Not, a short which recently received its UK premiere at the London Comedy Film Festival. Richard was trained in Chicago style long form improv by a Second City alumnus and is also a UK cast member of the award-winning improv show Monkey Toast and a guest cast member of both Chortle Award nominated smash hit Austentatious and Grand Theft Impro. He is developing his first solo show; The Beta Males Sessions: Richard & The Storybeast.

Adam Blampied
Actor, writer and comedian Adam Blampied's solo acting credits include London runs with The Grassroots Shakespeare Company in The Tempest, A Midsummer Night's Dream and Othello. Adam is also the writer of prize winning short film Eugene. Selected to be made by a panel of judges including Roman Coppola and Chloe Sevigny, Eugene was directed by Spencer Susser and has been watched by over 3 million viewers on YouTube since its London and LA premieres in November 2012. Adam trained at LAMDA.

Guy Kelly
Actor, writer, comedian and improviser Guy Kelly's solo acting credits include several commercials and the comedy web series The Chaos (Hoot Comedy) alongside Dan Skinner and Rufus Jones. Guy is also one of the duo behind @foodpit, the cult pop-up restaurant spoof whose gastronomic columns have appeared as articles in several publications, including Time Out.