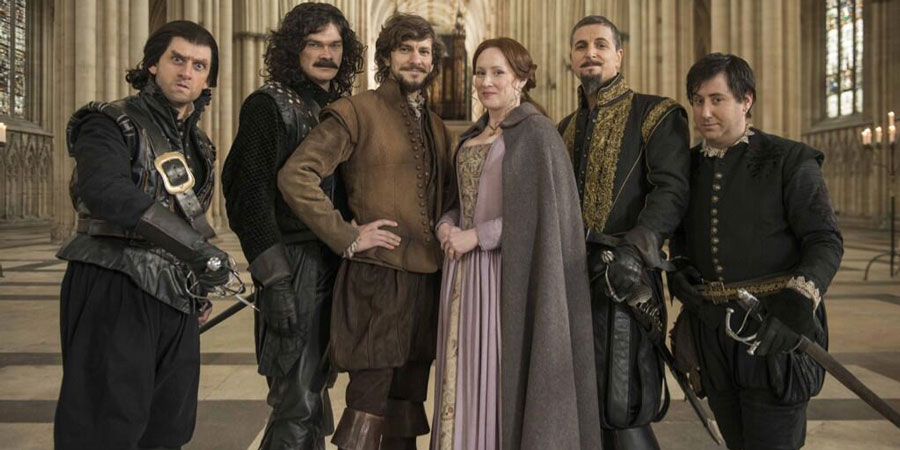 Comedy film charting the young life of William Shakespeare and his finding fame in London, starring the cast of Horrible Histories

Midlands lutist Bill Shakespeare is distraught when his fellow Mortal Coil players kick him out of the band for being too avant-garde. But Bill has dreams: he's written a fantastic play, and dreams of having it performed in London.

Meanwhile, relations between England and Spain are at all all-time low. The Catholic Spanish king, Philip II, imprisons an English spy and one of Queen Elizabeth's favourites, Sir Richard Hawkins, leaving the monarch with no alternative but to invite her Papist counterpart to England to discuss terms for his release. King Philip accepts, but has more than a simple diplomatic mission in mind.

In the Queen's court, the boastful Lord Crawley Croydon proclaims he is the greatest playwright in the land, and has a piece that can be performed for the celebrations surrounding the coming Spanish guests. Unfortunately for Croydon, it's a complete lie - and writing turns out to be much harder than he'd imagined!

Bill, meanwhile, sets out for London to make his name, with his wife, Anne, and children not far behind. Disillusioned and at a loss as to how to find his way in the bustling Tudor city, a chance meeting in a pub with a fellow writer and part-time thespian, Christopher Marlowe, seems to provide the young Shakespeare with just the guidance he needs...

It's a tale of murderous kings, spies, lost loves, and a plot to blow up Queen Elizabeth. Can one man prove the quill is mightier than the sword?