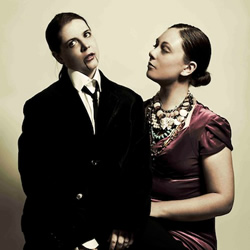 Lucy Trodd and Ruth Bratt had a fabulous run at the Laughing Horse Free Festival last year. Now they're back with even more silly and dark material to try out for their brand new BBC Radio 4 sketch show, Trodd En Bratt Say Well Done You, which is scheduled to hit the airwaves in early 2014.

Trodd En Bratt perform a set of character-lead observational sketches, occasionally interspersed with moments where Ruth and Lucy play versions of "themselves". The pair honour the golden age of the double act, whilst playing everything from stag do lads trying to "out-lad" each other, to farting choristers, to extremely loud, joke-telling tourists. They can also be seen at the festival performing with The Showstoppers!