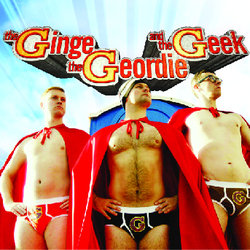 After four sell out years playing to 21,000 people, the boys return to bring you all the best sketches from their upcoming BBC2 series, plus Edinburgh stage favourites. In their traditional fringe style expect an hour of clean, uplifting fun and silliness. There may even be the odd new sketch thrown in to keep us all on our toes! Performing the show twice daily at 4.30pm and 6.15pm, there's now no excuse to miss the sketch show everyone's talking about. Previous live press: ***** (Herald), ***** (ThreeWeeks), **** (Sunday Express) and many more!

After four sell-out years playing to over 21,000 people, the boys return to bring you all the best sketches from their BBC Two series, plus Edinburgh stage favourites. Prepare yourself to experience a whole variety of characters including a scarecrow in love with a crow, 1950's inept secret agents and a dancing pizza. This skilled trio present an hour full of fun and silliness for everyone, with a surreal twist and a big musical ending. Join them for this exciting 5th year at the Edinburgh Festival, which promises to take you on a journey from the sublime to the ridiculous!

For the last two years they have performed two sell-out shows a day with extra shows added. The guys put this phenomenal success down to genuine Edinburgh festival 'word of mouth' and a loyal fan base made up equally of fringe visitors and locals aged 8-80! Many fans came to see both shows and brought more and more friends and family. 2013 saw them complete filming for their new BBC Two sketch show written by Paul, Kevin, Graeme and their writing partner John Hoggarth, and directed by Mandie Fletcher (Blackadder, Absolutely Fabulous) due out in July.