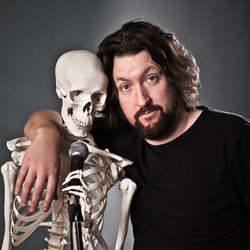 Irish comedian Keith Farnan (Michael McIntyre's Comedy Roadshow, Live at the Comedy Store, Just For Laughs All Access) follows his acclaimed shows about money, the death penalty and feminism with a show about fear. Franklin D Roosevelt said: 'We have nothing to fear but fear itself' - frankly, an understatement, Franklin. Fear Itself sees Keith grapple with the personal, the political and puns as he tries to explore a vast theme in just under an hour. 'Artful, satirical ... with a lightness of touch and a hefty helping of roguish Celtic charm' (Sunday Times).

One of the Fringe's most insightful comics, Keith Farnan, returns to the festival after a year off, this time exploring Fear Itself, a rather appropriate theme for many people involved in Edinburgh...

The world is fuelled by fear. Global fears; plague, war, asteroids, a robot uprising. Everyday fears; dying, meaninglessness, random violence, spiders. In all this, the key ingredient is uncertainty. Dithering leaders do not instil confidence. The indecision of a doctor does not inspire hope. Wavering lovers fail to arouse joy. But despite our days being filled with worries we continue to function and, without this uncertainty and fear, there is no love, there are no triumphs. There is nothing worthy without fear. Dammit.

Franklin D. Roosevelt once said we have nothing to fear but fear itself, and then America dropped two nuclear bombs on a civilian population, creating quite an addendum to the list of things to be frightened of. Nowadays, the world doesn't need North Korea to throw a tantrum to be afraid. People can be terrified all on their own, especially if they have a fear of loneliness. However, there are some who are willing to do whatever it takes to overcome fear and embrace uncertainty. Then, there are others who attempt to make a living out of both. Keith Farnan is the latter.

Irish born and bred Keith Farnan's solo shows have always been extremely thought-provoking, be it about sex traffic, racism, the Death Penalty or the economy, and each show has gone on to sell out to critical acclaim at the Edinburgh Festival as well as London's Soho Theatre and the Royal Festival Hall.

Keith has appeared on Michael McIntyre's Comedy Roadshow (BBC One), One Night Stand (BBC), Live from Amsterdam (Showtime), Montreal's Just For Laughs and presented his own comedy documentary for RTE, Money, Money, Money: Keith Farnan versus the Economy. He has featured on a variety of radio shows including Loose Ends (BBC Radio 4), The Guessing Game with Clive Anderson (BBC Scotland) and Colin Murphy's Great Unanswered Questions (BBCNI). He was writer of one of the Irish Times Tiny Plays and received a commission to write his own play, The Last Stevedore. He has also written for Time Out London, Hot Press and The Irish Post.