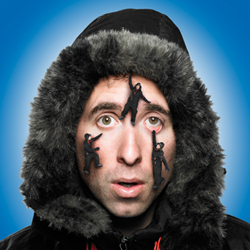 A new show from award-winning comedian and warm-up for The Graham Norton Show and Mock The Week. Joe plays a hapless climber who retells the story of a treacherous climb. 'For people who like their comedy funny' (Matt Lucas). 'Joe Bor is a must see' (Alan Carr). 'Hugely talented character comic' (Kate Copstick, Scotsman). 'Very funny, excellent young comic actor' (ThreeWeeks). www.boundandgaggedcomedy.com

Welcome to climbing enthusiast Jasper Cromwell Jones' book launch. It's a book about climbing and the dramatic events of his most recent expedition. During an hour of intimate sharing from memory, video diary and readings from his forthcoming book, Jasper tells us what went wrong. Regaling us with tales of his treacherous climbs and captivating us with his realisations about his separated parents, his cheating girlfriend and most tragically, the day of his best friend's untimely death.

In a brand new show from award-winning comedian and TV warm-up man, Joe Bor; Jasper Cromwell Jones spoofs the confessional disaster movie and literary genres giving a tongue-in-cheek homage to works such as Touching The Void and 127 Hours and Between a Rock and a Hard Place and combines it with our love-to-hate favourite posh-idiot characters evocative of Made in Chelsea and the London Mayoral Elections. Jasper is lovable and laughable in equal measure. Joe regularly works as a warm up for TV shows - 8 Out of 10 Cats, Alan Carr Chatty Man, Graham Norton Show, Mock The Week, The Matt Lucas Awards and Piers Morgans Life Stories.

He has also appeared as a panellist on Talk of the Terrace, Would You Rather for SoTV and has placed in numerous awards including...