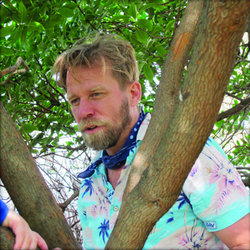 A kind of comedy show about the meaning of life. Or not. Bloody award-winning! This year featuring cliché. Mrtonylaw is a way of doing comedy but is it proper? No. Award winning! Loads of stars! 'A gloriously virtuoso display of absurdism... Law is a master of the deconstructionist style of comedy' (Scotsman). Ludicrous. 'A stream of joyous nonsense ... as clever as it is loud, ridiculous and hilarious ... a gem' (Comedy.co.uk) and another! 'Clever and blithely zany...' (Telegraph). Big words, but I sense they are positive. Start your day with lawunch, geddit? Quality.

The unpredictable force of comedy that can only be known as Tony Law (or Mr Tony Law, to you) returns to The Stand at the Edinburgh Fringe Festival with a brand new hour of the boundary pushing, surreal stand-up and edgy almost-yarn spinning that has earned him his place as one of the most revered comedians on the circuit.

Maximum Nonsense is a kind of comedy show about the meaning of life. Or not. We all know that Mrtonylaw is a way of doing comedy, but is it proper? No.
Start your day with 'Lawunch', geddit? Quality.

Following a hugely successful Edinburgh Fringe run last year with Go Mr Tony Go! which received a plethora of rave reviews as well as being named AmusedMoose Laughter Award Best Show Winner 2011, Tony Law has completed a tour of the UK, including a sell-out run at London's Soho Theatre before being crowned Chortle's 'breakthrough act' after 14 years in comedy.