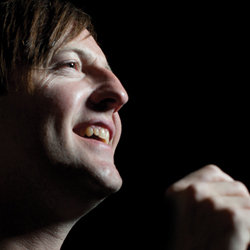 Edinburgh's most bankable act returns after last year's Edinburgh Comedy Award nomination. You have seen him on Mock The Week, Celebrity Juice, Have I Got News For You, Argumental, Great Unanswered Questions, Wall of Fame, Alexander Armstrong's Big Ask, The Panel, 9/11 Conspiracy Roadtrip and storming Live At The Apollo; now see him live and in person... That's the spirit. 'One of the most significant comedians working in the country today' (Independent). ***** (Scotsman). ***** (Herald). ***** (Scotland on Sunday). ***** (Times). ***** (Independent). ***** (List). ***** (TimeOut). ***** (Edinburgh Evening News).

Renowned for his cutting edge comedy, intrepid social commentary and political protagonism, an Andrew Maxwell show is always a must-see for anyone who enjoys their laughs unflinching and topical.

In 2008 Andrew filmed the one-off pilot Conflict Revolution for BBC Northern Ireland. It was released as a DVD alongside a live recording of his 2008 Edinburgh show and reaffirms Andrew's continued development and exploration of comedy as a way of crossing cultural, social and religious borders.

He released his third live DVD at Christmas 2010 and this year has toured Ireland, performed at The Melbourne Comedy Festival and at The Altitude Comedy Festival, of which he is a founder member. He most recently appeared on Have I Got News For You and Mock The Week, Celebrity Juice (ITV2) and Argumental (Dave) and also took part in Comic Relief's 24 Hour Panel People challenge in a special version of Mock The Week.

This year Andrew has appeared on Live At The Apollo and piloted a documentary for BBC3 based on the 9/11 conspiracy theories. This has since been commissioned as a series to be transmitted this year.