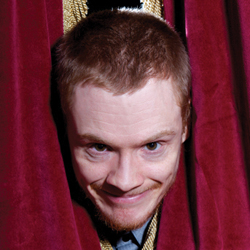 Star of Live at the Apollo, now a regular on Channel 4's Stand Up for the Week, Andrew Lawrence arrives in Edinburgh following a sell-out 50 date tour of the UK. Twice nominated Best UK Headline Act at the Chortle Awards 2010/11, also a former double Edinburgh Comedy Award nominee, audiences can expect Lawrence to deliver an hour of top-class stand-up. 'He discharges kamikaze philosophies a-hundred-to-the-dozen. And it is outstanding.' (List) 'His almost Victorian blend of rage and good grammar is still a delight.' (Sunday Times).

Star of Live at the Apollo (BBC1), Michael McIntyre's Comedy Roadshow (BBC1) and now a regular on Channel 4's Stand Up For The Week, Andrew Lawrence returns to the Edinburgh Fringe with his brand new show, Andrew Lawrence is Coming to Get You.

Following on from last year's 50-date sell-out The Best Kept Secret In Comedy tour, Andrew will debut his new show at the Pleasance One. Nominated as Best Headliner in the Chortle Awards (2010 & 2011) and a former double Edinburgh Comedy Award nominee, Andrew is a seasoned internationally acclaimed comedian having been invited to perform at the Melbourne International Comedy Festival and Just For Laughs in Montreal.

After two series of his popular BBC Radio 4 show What To Do If You're Not Like Everybody Else, Andrew has just had a new six part show commissioned for the same station to be broadcast in the autumn.