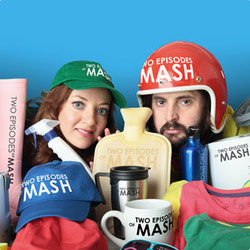 Award-winning comedians Joe Wilkinson and Diane Morgan present their new sketch show. 'Blending the absurd and the sharply real with effortless ease, not dropping the energy or gag rate for a moment' **** (Sunday Times).

They're back, but don't expect any hefty punch lines or glitzy merchandise.

With 'moments of such brilliance' (Chortle) and 'humour that floats like a butterfly but stings like a bee' (The Scotsman), Two Episodes of MASH 'blend the absurd and the sharply real with effortless ease, not dropping the energy or the gag rate for a moment' (The Times), creating a 'quite wonderfully funny' (Telegraph) show that 'works brilliantly' (Metro).

For 2010, Two Episodes of MASH have enlisted Stefan Golaszewski, director of Tim Basden's Won't Say Anything and Jonny Sweet's Mostly About Arthur - both Edinburgh Comedy Award winning shows - as director, bringing a new edge to their laid-back manner and absurd sketches.

The comedy duo behind the act are Diane Morgan and Joe Wilkinson, both established stand-ups in their own right. Diane's credits include BBC's Mock The Week, Peter Kay's Phoenix Nights and Ken Campbell's Warp Experience, whilst Joe has supported Alan Carr and Russell Howard on tour and is set to appear in BBC Three sitcom Him & Her later this year. The pair met during the Hackney Empire New Act of the Year 2006, which Joe won and Diane finished as runner-up, and they formed Two Episodes of MASH in 2008.

In May 2010, BBC Radio 2 aired a Two Episodes of MASH pilot which received entirely positive reviews, being picked as Radio Choice by The Independent, Time Out, Heat Magazine and the Financial Times, as well pick of the day by the Telegraph.