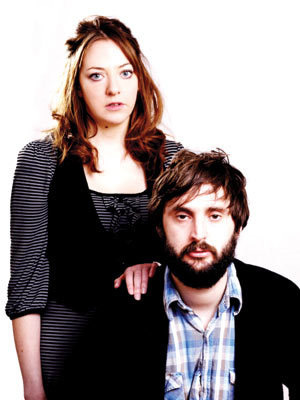 There are a lot of great sketch shows at the Fringe this year, and Two Episodes of MASH - aka Diane Morgan and Joe Wilkinson - are right up there. The likes of The Penny Dreadfuls perform expansive sketches which go on for minutes, however, in the main TEofM eschew big characters and storylines in favour of quickfire gags. The press release may say "don't expect any hefty punchlines" but the show is, in fact, full of them; between the punchline-less absurdist situations there are plenty of sketches which are essentially one-liners acted out.

Of course, this type of comedy requires a large store of killer ideas, but that is something Morgan and Wilkinson clearly possess. Like any good one-liner comic, they take you down one path only to flip the situation on its head, and, such is their imagination and creativity, even when you know there is going to be a twist at the end of a sketch, you can never guess what that twist might be. When they do resort to a cheesy, "and then I got off the bus" type-punchline, they ironically exclaim "a proper joke, ladies and gentlemen!" - but in fact the show has jokes in bucket loads.

Luckily, the sketches come so thick and fast that I feel I can indulge you with the details of one or two without ruining it. Favourites included a tortured game of Eye Spy in which Wilkinson can't imagine anything beginning with R other than rats or the roof of his own mouth, and an aggressive couple who turn the air blue while sitting on the front row for a recording of Songs of Praise.

Directed by Stefan Golaszewski of Cowards fame, you see shades of his fellow performers Tim Key and Tom Basden in Wilkinson's nervy mannerisms and brilliant timing, and while Morgan is frequently the 'straight man', her subtle expressions often upstage her comedy partner. The sketches may be silly, but if you want shouting, gesticulating and general running around you will certainly have to look elsewhere. In the main this is a nice change of pace but, call me unsophisticated, I couldn't help hoping to see a little giggle - something of the real Wilkinson and Morgan beneath their considered performances which might add a touch of warmth to their otherwise excellent sketches.

Listing for Two Episodes Of MASH: A Sketch Show By These Two People